I started to watch The Mentalist again. The new season is back. Usually The Mentalist TV show is just something entertaining for me, I watch it after a long day of work, trying to relax, watching something not very complicated. I like the characters though the intrigues and stories are always quite simple. Yesterday was the first time that an episode touched me more particularly. Nothing fancy or really deep but I was in the mood for that after having posted a piece on the blog.

In the 7th season, for those who do not know, the two principal characters were finally together. Patrick Jane is IN LOVE. After seven years of watching this show, finally the male character is in love. It is very rare that on-screen two actors could have such a chemistry as Patrick Jane and Teresa Lisbon. More than a complicity, either they are very good actors or they are really in love off-screen. I was particularly touched by the way she looks at him. Strange, it gives me goosebumps each time.

I have to admit, I have been girly and over-romantic ever since this sentence was pronounced. It seems simple but so right. Simply said and here I am, writing something about it.

I wish any woman could hear this from the man she loves.

What feels right should always be our guide. 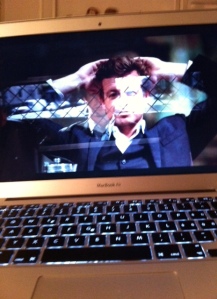 Yesterday was perfect evening. So little could make me happy. Very simple things. I received the DVD of the new season “The Mentalist”. There is nothing complicated or sophisticated about this TV series. Just entainterning and light and I love it.

A cup of tea.  Two small pieces of chocolate. I watched some episodes in bed. Felt self-sufficient but in a good way. Yes, so little could make me happy.

Yesterday was perfect evening. Even though when I fell asleep I realized that he did not send me the daily song. But it was fine too. I texted him “good night”. The accumulation of small things is certainly what we need and what makes us feel good.

Before I turned off the light, for a second, I just wondered if his songs were part of the small realities or the big important things in my life. No need to categorize, I think. Just like The Mentalist, his songs make me happy. I fell asleep, smiling.